Svaroopa®: a Spiritual Yoga for Every Body & Age

Embrace Your Ego, How the Ego Surrenders! Part 3

Embrace Your Ego: What is the Ego? Part 2

Embrace Your Ego: Don’t Shred it or Kill it! Part 1

Awakening is NOT a State of Mind or Silence: Bentinho Massaro

When the Divine Truly Guides Your Life; An Awakening Story

Lilou Visits Drunvalo: Angels, Dimensions & Taking the Body with You!

On Oct 30 and 31, 2015, we participated in the Glimpses of Nithyanandoham webinar workshop with Paramahamsa Nithyananda. It was quite an experience. The three of us were quite moved by how powerful the experience of silence with him was.

For those who haven’t heard of Paramahamsa Nithyananda, commonly referred to as Swamiji Nithyananda, you may have seen the video that’s recently gone viral about the Californian 9-year-old who’s third eye awakened during an Inner Awakening event in 2015 with Swamiji. He is considered a living incarnation of the Trimurthi: Brahma, Vishnu, Shiva. (See an ancient Nadi reading of Swamiji on a devotee’s Blog.)

A devotee of Swamiji shared on Facebook the unlisted video of the process he guided us through on the 2nd day. I suggest that you do NOT watch the video, rather do as instructed and get your blinders/blindfold and participate. Allow 45-60mins.

This video, Glimpse of Bioenergy meditation process, is ‘unlisted’; not publicly on the NithyanandaTV YouTube channel, so I have posted it on BeholdGodcom’s Facebook page until (and if) they make it public. (Please Like my page when you visit!  🙂 ) 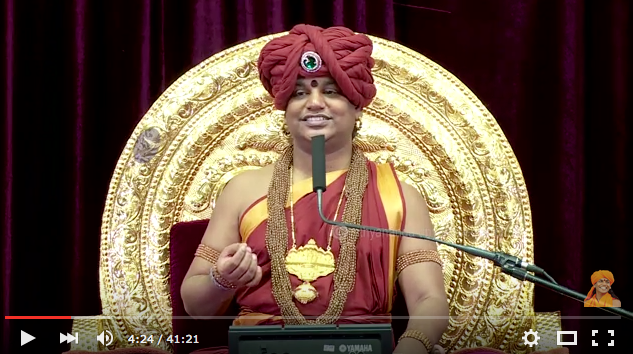 These unedited notes, below, of the Nov. 4 satsang (video posted at the end of the post) are a good synopsis of much of what he taught on the two days of the Glimpses of Nithyanandoham webinar. It is interesting to note that some participants of this webinar have reported being able to read through their blinders after that process. Try it!

Wakeup to Your God Particle: Nithyanandoham
by Paramahamsa Nithyananda

I wanted to share some of these important Truths. Please understand, working on your muscle memory awakens your Possibilities, not Powers, please understand!

There is a difference between circus and magic. In the young age you may not know the difference, because both are shows. In circus, the possibilities of the human muscles and human body is awakened, they will bend, roll in an unimaginable way, which you literally can’t imagine, where the possibilities are awakened, that’s one example.

See, even living with less food or no food or ability to eat whatever you want and digest, all these are not powers, they are only possibilities. They are only possibilities not powers. You need to know the difference, physical possibilities, physiological possibilities. If you are able to sleep as long as you want or able to be without sleep as long as you want or able to sleep whenever you want and be without sleep whenever you don’t want – all these are possibilities, all the memories recorded in your muscles, like your day-to-day activity: from brushing the teeth, taking bath. I have seen Yogis who never brush the teeth or took bath for years! You won’t find a, not even one small smell around them. I literally lived around them. No 1..2..3.. I have seen yogis. But even all this is only Possibility not Power.

Whatever you do in the level of possibility, many circus people will be doing it, Guinness record holders will be doing it. That does not mean they became enlightened or they became spiritually aware of themselves or they developed the spiritual cognition, No! They may, may-not have but it is not must, understand.

Understand, if you carry the root cognition, ‘whole world is out there to cheat’ – everyone will look like a cheat! And you can always perceive anybody as a cheat, even, if Krishna comes down you can call Him as Chor! (thief) Of course he waits, just like he waited for Sisupala, that does not mean what you said is right, understand, he waits, counts, just like how he waited and counted for Sisupala, See ‘hundred and first’ abusal only, Sisupala received the punishment that does not mean all the other 100 are accepted, are right! He waited for his own reasons. That does not mean Sisupala is successful, Sisupala is right!

Anyhow, listen, when you think everyone is out there to cheat, you can perceive anybody as cheat. When you think everybody out there is only to support, you can perceive anybody as a great support. I tell you, the cognitions you carry about yourself, about world, about others, about Life, about God, about nature – when those cognitions are completed, the limiting cognitions which are called incompletions, when they are completed, and the powerful cognitions are awakened, that expresses powers, understand!

Understand, when your small inner image, the inner image which was built accidentally is completed, right visions about you can be implanted, please understand, always, 99{887f5f086bf7ecfe0ffcf8ecb4af17cd4bb77c44b81b09297ce0ab4545f909fd} of the time, your thought about your future will be just a fear of failure. Your vision about the future should be Celebrating what you want as reality. That is only going to infuse energy, intensity for you to run: “I am going to be doing this, I am going to be doing that, I am going to be making it happen.”

Understand, possibilities! Possibilities are different, the powers are different. Your low-self inner image will always make you think about your future only as failure. When you complete with your lower-self inner image, you will start having vision – means you just know “I am living to make what I want into reality.” Understand, that, that only is going to inspire you, make you do what you want. That only is going to push you to make what you want as reality. The moment you complete with your lower inner image, suddenly you will see not just so many possibility, possibilities alone, but powers will start expressing because in the bio-memory level, any completion is done, consciousness is directly opened up.

For example in the muscle memory level, if you stop eating that does not mean your consciousness will be awakened.

Of course in the Nirahara Samyama I use, awakening your consciousness for your Nirahara, that is different. Don’t compare Nirahara Samyama. [BeholdGod note: This is a process to complete with food and eating-related patterns.]

Any man ordinarily, there are many people in the platforms [railway], because of poverty, they master the art, the body automatically masters only once a day they eat but they survive and whatever they get in the road side they eat, they just digest. That does not mean they are spiritually awakened, the possibility in muscle memory is awakened and I have seen people sleeping in the platforms, railway platforms and the city area platforms, it is not that they are spiritually awakened, but their possibility of muscle memory is awakened.

Listen, when your bio-memory is completed, naturally directly it works on consciousness. Multiple powers are expressed; actually you just need to complete with the cognition given to you in the young age accidentally that you can’t read through 3rd eye. Just you need to complete with that cognition, you will simply open your 3rd eye and start reading, you will simply start doing it. So many things, so many powers will start expressing the moment your bio-memory is awakened, the moment the bio-memory is inspired, the moment the bio memory is visioned, is inspired.

Actually the whole Nithyanandoham program you won’t even feel like the process, you may not even feel like process. It is just a spiritual vacation with Swamiji – that’s all! Because even to awaken your bio-memory you need to sit in a Mandala, in a specific posture. You no need to control your mind, but you need to be available in the specific mandala, the specific way, in a specific dress, attire, and all that so that I can awaken your bio-memory.

At the most you can enter into it and experience it, for me they are not only absence, they can be used as a tool or a weapon, I can just pick up the silence and unclutching like a rope, to awaken anybody.

I am going to use, Power of Silence! And Power of unclutching, to awaken the God particle in you. Just the one glimpse of session, hardly one hour we had a process, in that so many people are saying, their 3rd eye is awakened and they are able to read blindfolded. I am getting messages in the Facebook and everywhere and still people have not come down from that silence. It’s only one-hour process, one hour, at the most 10 or 20 times I would have said “Om” .. nothing more, nothing more!

Understand, ordinary people, an Enlightened Beings, can use Power and Sound but only an Incarnation can use Silence and Unclutching because it is too subtle.

The discovery, you will do it about yourself so strongly, THAT will be the immeasurable, the most valuable gift for your life. The way you wake up to you. The way the God particle wakes up to itself. The way Sadashiva just remembers Himself and His own existence. See, it’s just like a, you are in a nightmare, you saw somebody chasing you, 10 tigers, 5 elephants, 2, 3 snakes, and you wake up and you remember this identity, vow! You are not in danger, you are safe, that identity was false. The way you wake up and remember, exactly the same way, when you wake up, how you feel relieved, exactly the same way, you will wake up to your God particle!

So every day you can send any questions you have about Nithyanandoham or these great truths I am revealing, I will continue to answer.

[With thanks and due acknowledgements to Ma Suganthy Gopalachari for the unedited notes on morning satsang.]

1 Comment so far. Feel free to join this conversation.

Open the Flow of Abundance NOW

Ho’oponopono Cleaning Tool
Flor-de-lis is a cleansing process that releases memories of bloodshed of constant warfare and slavery to ideas, places, situations and beliefs that result in constant warfare.

The way to use it:
"I put the Flor-de-lis on the situation."
--Ihaleakala